Can an unconscious person hear your thoughts?

In some cases, yes.

My father has advanced dementia. First diagnosed in 2014. He's been living in a nursing home since April 2015. This August 14, he had an adverse reaction to several drugs that a previous doctor authorized; drugs to help him sleep, function, and reduce his restlessness. His heartbeat became erratic. His blood pressure dipped to dangerous lethal levels. Nursing home immediately called 911 and he was transported to the hospital in an ambulance Friday afternoon, Aug 14.

I stayed with him at the hospital day and night (24/7) from Friday Aug 14 through late Wednesday Aug 19. I slept on a sofa near his bed every night; ate hospital food; talked with nurses and doctors; monitored and noted his progress; asked questions from the medical staff; listened to specialists who examined him; kept my family updated on his progress and doctors' answers by phone every 3 hours. 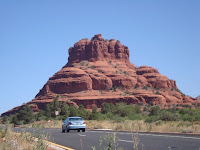 While sitting near his bedside one night, he was sleeping deeply, not awake, aware nor conscious. Drugs in his system produced deep sleep.

Watching him sleep, I thought about Sedona & envisioned Bell Rock. He mumbled in his sleep "Bell". I was shocked and decided to test his response again. Maybe I was hearing what I wanted to hear?

I thought about all those Red Rock hikes w/Zoe The Black Coyote. He mumbled "trails". I thought about dad's visits to the Grand Canyon 3-7 yrs ago. He mumbled "big hole. can...yon." Then I thought "dad, if you get well, you can go back there." A few hours later, he started waking up. It was morning. He mumbled his first word: "Arizona." 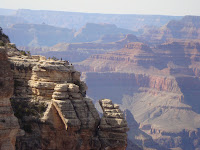 That morning, after uttering "Arizona", he had a very good day. He was awake, alert, ate all his meals, began to speak more clearly. Previous days, he could not speak, did not eat, blurry-eyes out of focus and he couldn't hear what anyone was saying. This morning, he could. He acted normally.

This is not fiction. It's fact. Unfortunately, nobody else except nurses were around to witness it. Don't you hate it when that happens?

Mysterious miracles can happen. While at hospital from Friday Aug 14 until he was released Friday, Aug 21, I visited the hospital chapel at least once/day. I asked God, His Angels and other "invisibles" for their divine help to give my dad peace, rest, comfort and happiness. They answered my prayers often. My father is out of the hospital now, living in a new nursing home where he is receiving excellent care. The new nursing home uses drugs as a last resort. They prefer holistic methods, like my dad does for last 40 years.

My father was the first person to introduce me to energy healing, vitamin supplements, holistic oil remedies for ailments, reflexology, meditation, acupuncture and power of your intuition. He hailed all these healing methods back when no one talked about them: in 1970s. He used these methods from late 1970s through 2012.

When he stopped taking herbal supplements, vitamins, coconut oil, and drinking Aloe Vera juice, his health declined quickly. We've re-introduced those healthy habits of his over last 45 days. Some days he's awake, alert, talking, walking. Some days he's not. Some days he's on medication. Some days he's not. We're in process of weaning him off all medicatios now. Especially since Friday, Aug 14. Some drugs you cannot immediately stop. So it's a work in progress.

I learned so much from this experience with my father. Will post other facets soon.

Posted by Sedona Spirit Psychic - Robin Amanda at 9:00 AM