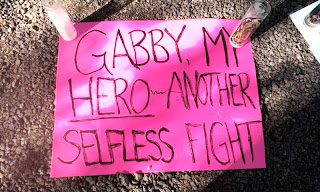 This poster captures the essence of this Number Four year in Numerology - 2011 - Year of the Activist - Take Unselfish Action. Took this photo during my Tucson trip in January, 2 days after the shootings. It rested at Gabby Giffords' makeshift memorial created by local Tucsonans outside her office building.

Every year has its own personality that colors our experiences. We're already seeing patterns related to Number Four Year surface & it's only March.

Good medicine Number Four Year gives us: Positive attitudes, practicality, common sense, builders not consumers, serving others vs. self-serving, big picture (global) view, creating a plan & executing it, doing vs. talking, discipline, detailed actions produce long-standing results, hard-working, devoted, cooperative, opinionated, achievement, completion of long-standing projects, organization, patience. Working patiently with the current system of order to affect change. The simple things matter most.
See this already? Me too. Practical, common sense Americans taking action in large groups. New Facebook & grassroots groups being formed daily made of like-minded individuals wanting to affect change. Newly elected US House Reps creating their own caucus to flush out government waste issues that negatively affect our country. More groups & media (PajamaTV, etc.) devoted to common sense thinking, practical, disciplined topics.
The downside of a Number Four Year? Stubborn, stuck-in-the-mud, outdated earthbound mentality, narrow-minded thinking, verbosely vulgar sentiment, limited views, repressed feelings exploding & harming others, trapped tension, hasty actions, lack of preparedness (expending too much energy, getting exhausted, taking longer to recharge your batteries & feel balanced, clear-minded).
See pattern here? Me too. Started with Loughner shooting at Tuscon Safeway on Jan 8, then Tucson Sheriff Dupnik polarizing our society with his narrow-minded view playing vulgar blame games, the press running with it - creating a divided country. Then tensions moved to the Middle East where widespread physical harm to others occurs during protests. We're even seeing US hostile, violent, vulgar protests in WI, CA, TX, IL, AZ. Opinionated, devoted protestors using the US Constitution to protect their right to protest & free speech (using current system of order).
How can we turn the cycle around from 2011's negative aspects to positive ones? Take practical, common sense action on something you're passionate about that also helps others. Using the 2011 good medicine of focus & discipline, combined with "big picture" mentality, find an issue most everyone agrees with (creating unity) and focus your energy on that - even if for only 2 hours a week. Divide & conquer mentality may rise, but with focused intent, you can rise above it & affect positive change.
I believe, with every ounce of my soul & heart, every person living on this Earth can make a huge difference - a positive influence &/or contribution in the world. Big or small doesn't matter. It's also my belief that most of us walking the planet at this time bring special gifts to help humanity transform failure to success - to bring unity, balance, understanding, peace, justice. To buck the old 2-legged patterns that trapped us, causing civilizations to end. We're back to "do it again" differently - smarter, wiser, more patient, determined, focused than ever before. We're more aware, enlightened, self-empowered. Helping ourselves & others walk this Earth in free, productive, peaceful societies as long as we choose. Maybe that's the real definition of "Age of Transformation"? Not allowing fear to control or overpower us.
This year's medicine speaks to our ultimate use of self-empowerment. In years past, individuals released old patterns that no longer served (emotionally, spiritually, physically, mentally). We stared down our internal demons, mastered our minds, conquered our internal fears. We're fully equipped now to see & act in the bigger realm of things - problems & solutions bigger than us that affect us on quantum levels. Our internal work is done. Now it's time to shine in the external world. To allow our soul (which has immense courage of its convictions) to lead the way where we previously feared to walk.
Number Four Year practical side: Focus on what's happening in your own backyard (US, state or local).  Will the change you want positively affect others too or just  you & your family? If for others too, research it, act on it, organize. Develop a plan & execute it. Make certain your focused issue will enhance, improve others' lives (the majority), not strip away their self-respect, freedoms or rights.
The smallest contributions can yield big results. The first Mid-East protest in Tunisia started on FB & Google with a very small audience. Now almost every Mid-East country is flooded with protesters by thousands in just a few short weeks. You don't have to quit your job - two hours a week could prove beneficial. Snowball effect.
In the US, we've been given a great gift, what some have often called (even today) the ultimate spiritual experiment. A country where we're all created equal, protected by laws (constitution) that allow each of us to speak freely, express freely with mutual respect, live with little government intervention & control, pursue happiness, peacefully protest, organize in groups at will, and free to express ourselves without persecution. We're very lucky.
Let's use those self-empowering rights. Let's use the Number Four Year medicine of 2011. Let's act & "be the change you want to see in the world." (Ghandi) There's no time better than now. We've been given a great gift. With gifts, talents, the right environments and channels, we're obligated to use the powers of them all.
Blessings....
Robin Amanda
www.sedonaspirit.us
www.facebook.com/robinamandakelley
www.twitter.com/sedonarobin
www.youtube.com/robinamandakelley
Posted by Sedona Spirit Psychic - Robin Amanda at 4:15 PM