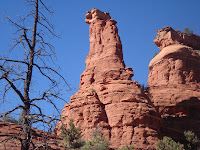 Over the last several years while living or visiting Sedona, I asked numerous people from different backgrounds about legends or myths surrounding Sedona.

This story seemed to be the same, no matter who I asked: natives, anglos, long-time jeep guides, etc.

Kachina woman towers above Boynton Canyon, Land of the Seven Main Canyons. She is a vortex, but also a beacon for humankind.

Several thousand years ago, all 2-leggeds lived on the surface of Earth, like we do today. We lived in unity, peace and understanding for several thousand years. Walking every pathway of Mother Earth. Great Mystery (aka God) created us in his image and also gave us free will, egos and a growing, expanding, questioning mind. Over time, as our minds expanded with knowledge, our egos and desire to control expanded as well. We began controlling and manipulating other 2-leggeds. We created big wars to prove our superiority over other tribes. Eventually, we killed each other, except for a handful of 2-leggeds who sought shelter during those times.

Great Mystery was severely disappointed. He moved us from the surface of Earth & its rich abundance, down to Middle Earth (like the hobbits!). And he gave us a Guardian - Kachina Woman. In Hopi legend, Kachina was like the Virgin Mary, Hera from Greek Mythology, and Lakshmi from Eastern Indian folklore. Kachina was our divine protector, moderator and overseer. She ruled over us in Middle Earth with a kind, gentle hand, but also reported back to Great Mystery often, as he re-built the Earth we almost destroyed. 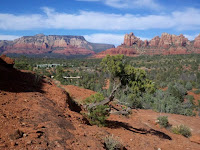 Several hundred years went by. We behaved ourselves. Kachina went to Great Mystery, told him how well we got along and asked if we could return to the new abundance of Earth's surface he created. He agreed. Under two conditions: (1) That Kachina Woman continue looking after us, looking over us. (2) And should we start destroying each other again, Kachina Woman would crumble or fall - as a signal to all 2-leggeds that Great Mystery was unhappy again and we'd be forced to straighten up without the guidance or help of Kachina - or else he'd move us all to some undisclosed, dark world, never to return to Earth's beautiful, abundant surface ever ever again.

So, if ever Kachina crumbles or falls, Hopis believe humanity is lost and will soon move to a dark, unknown place worse than Middle Earth.

Last January or February, Sedona experienced a light earthquake. Some of us flew over to Kachina Woman to see if she'd been affected. Parts of her base crumbled down near Boynton Canyon Trail, but she's still relatively in tact.