Sedona's Broken Arrow area got its name from the Native, Early-American & Hollywood legend of how the Apache and American white people broke the cycle of violence with each other, "breaking the arrow".

Though the peace initiated by Cochise and American Tom Jeffords happened in Arizona, it's unclear if it actually occurred at this site.

This is the site where Jimmy Stewart's 1950 movie "Broken Arrow" was filmed, describing the truce. Nomadic Apache tribes often traveled to the Sedona area, where they found safe haven to relax, recharge between attacks with the Mexicans and the Americans. This site is one of many in Sedona where Apache walked.

For over 200 years, Indians, cowboys and outlaws used the Sedona area as a great hiding spot, even during the 1700s when the first Anglo settlers starting farming here. One Sedona spot, "Robber's Roost" is a true outlaw hideout used during the Wild West days.

You can't talk about the Apache-American truce without mentioning Geronimo. He fought as a fierce warrior with Cochise' Chiricahua-Apache tribe from 1851 until the Arizona truce in 1872 - mainly fighting against the Mexicans. One man, one life, many legends & stories.

The Mexican-Apache battles began long before Geronimo's birth in New Mexico Territory (Gila-Mimbres Rivers) in 1823. Some say he was born in 1829, even that is mysterious. 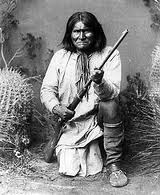 From a young age until 1886 or 1887, he continuously fought the Mexicans defending Apache territory which also helped the expanding Territories of the United States.

1851 was a horrible year for Geronimo. While he traded goods in a nearby village, Mexicans slaughtered all but nine members of his Bedonkohe-Chiricahua tribe in New Mexico. Killing his mother, wife, three children and fellow warriors and friends. With few tribe members remaining, and overcome with grief, he joined with Cochise and another Apache tribe to fight the Mexicans and avenge his loved ones' deaths. 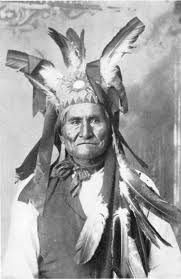 Originally named "Goyahkla" meaning "He that Yawns", he took the name "Geronimo" in 1851 while grieving his loss. Over the last 20 years, he'd often heard the Mexicans cry out "Cuidado! Geronimo!" when they faced him in battle. It meant "Be Careful. Pray to St. Jerome!" The Mexicans take original credit for creating Geronimo's legend. For decades, he was often hurt or wounded, but never fell to the enemy during battle. They believed he held spiritual shaman powers that protected him from harm, gave him "clairvoyant" sight and enabled him to "shapeshift" to defeat them. Those are myths. He simply knew how to successfully out-fox, outsmart and outfight the Mexicans.

Joining with Cochise in 1851, they continued fighting the Mexicans, winning most battles. They even fought on behalf of the US Territories. The Americans and Geronimo's Apache lived peacefully until 1863. That year, thirty American miners massacred Geronimo's new family in Pinos Altos, NM. From 1863 until surrendering in 1886, Geronimo avenged his family's deaths by torturing and killing "the White Man" Americans. He surrendered in Skeleton Canyon, Arizona to a man he admired, US Lt. Gatewood, who escorted him to Oklahoma.

In 1872, Geronimo split from Cochise when Cochise "broke the Arrow" with American Tom Jeffords, ending Cochise's war with the White Man. Geronimo went on to battle both Americans and Mexicans until 1886. Geronimo constantly protested the "reservation" idea. He didn't believe Chiracahuans nor any Indian Tribe needed US calvary protection. He also didn't like the compromises necessary to live on lands prescribed by US Calvary. He always felt, until the day he died, that his tribes would physically, morally & spiritually die under hands of American white man.

Geronimo believed in America's capitalist ideals. While on reservation from 1887 to the day he died, he sold photos & autographs of himself from 50 cents to a dollar. He also sold buttons from his outfits for 25 cents. And he wrote an autobiography in 1906. 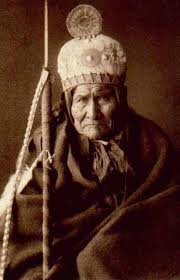 The first Apache "reservation", before the actual 1872 truce, was stationed in Camp Verde, about 25 miles south of Sedona. Cochise and his tribe grew fabulous crops there, living up to the area's name "Verde Valley" to this day.

In 1909, Geronimo died of pneumonia near Lawton, OK.  After drinking too much, he fell off his horse during a rain storm, on his way back to reservation. Some believe he was over 100 years old at the time.